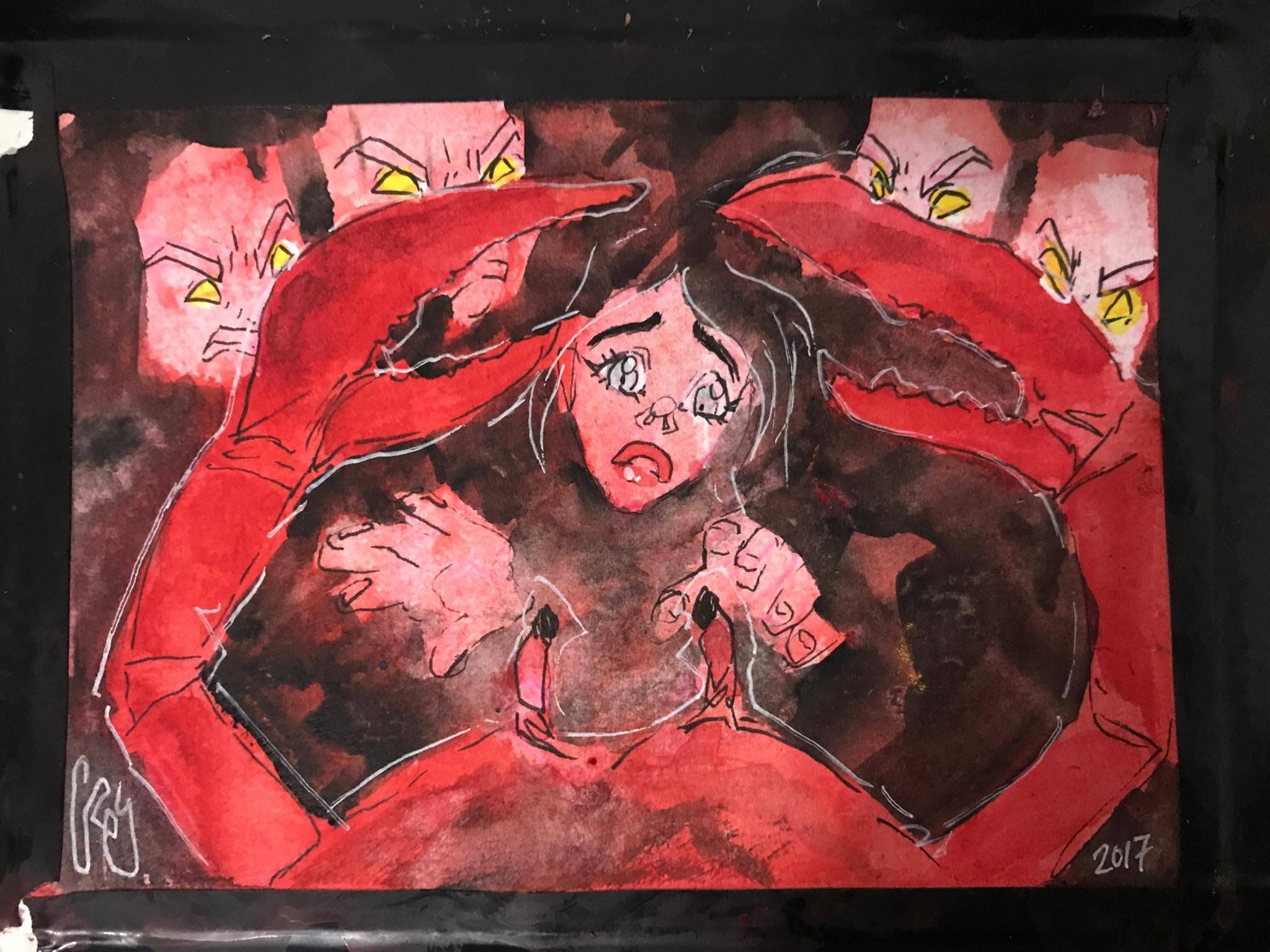 Cancer
[The 4th sign on the zodiac, indicating sensitivity, motherhood and emotional warmth]

Anna-Maree Axe steps down to the water’s edge. It was the same meeting point that she had used to meet up with her old acquaintance when she first arrived in town. Next to the river. In the dark. She hoped that no-one could see her.

“Thank you for meeting with me again,” Anna-Maree says when her guest arrives.

“I don’t have time for this,” her acquaintance huffs.

“I have to know where it is,” Anna-Maree pleads. “I know that you’ve taken it.”

“You shouldn’t have come back.” Her acquaintance goes to move off. “You don’t know what you’re doing.”

“I need to know,” Anna-Maree continues to plead. “Don’t just walk away from me!”

Anna-Maree steps towards her acquaintance and pulls them around to face her. She pushes the hood of their jacket off in desperation.

“Constance,” Anna-Maree pleads. “For Joanne’s sake, you need to tell me where it is.”

“You’re going to make a wonderful mother,” the midwife tells Heather Strong, handing the baby over to her.

Heather Strong looks at the baby girl in her arms and starts to cry. “She’s beautiful.”

“She looks just like you,” the midwife informs her. “She’s got your nose.”

Heather Strong laughs. “She’s too small to have my nose.”

The midwife giggles to herself. “Too true. She is way too small to have your nose. But I’m sure one day she’ll look just like you.”

“Joanne is in trouble, Constance, and you know it!” Anna-Maree screams.

“Lower your voice. Someone will hear us!” Constance says.

“It doesn’t matter anymore!” Anna-Maree starts to cry. “Joanne is not safe. She needs protection!”

“I’m sure Joanne is perfectly safe. I’m sure she’s probably at home now with Kyle and their baby, Ricky.”

“You know what I’m talking about Constance!” Anna-Maree is losing her patience.

Constance turns to walk away again.

“You have to help me Constance!” Anna-Maree screams, pulling at Constance’s jacket.

“You shouldn’t have come back here.” Constance pushes Anna-Maree away from her. “You have no idea what you’re getting yourself involved in.”

Heather Strong carries her newborn daughter out of the Peppercorn Patch hospital and approaches the car where her husband has arranged to pick her up. She opens the door and secures her daughter into the baby capsule in the backseat of the car.

“It’s going to be so sad to leave this place,” Heather says as she joins her husband in the front of the car. “We’ve made so many good friends here.”

“There’s no work for me here,” Christian Strong reminds his wife. “We need to go to Holgate so I can get a proper job to look after my family.”

“I know,” Heather says, placing a hand on her husband’s knee. “I know you want to look after your new family.”

Heather Strong had lived in Holgate for ten years with her family before her daughter became ill. Phoebe Strong was 10 years old when she was diagnosed with a brain tumour. She had been showing symptoms for a few months before her mother finally took her to a doctor to be looked at.

Understandably, the Strong family was devastated. Phoebe was too ill to comprehend what was going on. Christian Strong was so distraught about his daughter’s illness that he dived head first into depression. Heather Strong had to stay strong. She couldn’t collapse. Not for her husband, and especially not for her daughter. She realised she had to stay strong for three people; her husband, her sick daughter, and herself.

It was before one of Phoebe’s surgeries to remove the tumour that had invaded her brain that Christian Strong up and left the family. He couldn’t handle the stress any longer. He just left, and the last that Heather had heard he had checked himself into Holgate Bedlamites, the mental hospital, but she couldn’t bring herself to visit him. She had a sick daughter to take care of by herself.

Heather Strong had spent many years adapting. Adapting to her husband’s rapid spiral into depression and disappearance. She was now making of life what she could. She realised that life was too short to have regrets, and she never again made contact with Christian Strong.

She had survived. Heather Strong had survived her husband’s sudden departure. She had also survived the anguish of watching her daughter struggle.

Phoebe Strong, now 17 years old, had survived her brain tumour ordeal. Luckily, her life had been spared. She had been through so much herself and felt mentally much older than her biological age. Phoebe, like her mother, hadn’t had contact with her father. She felt somewhat angered by the fact that her mother wouldn’t allow her to see her father.

“Phoebe, honey,” Heather would say to her daughter, “your father ran off years ago. I have no idea where he is now.”

“I want to know him. I want to see him,” Phoebe would say.

“It’s a waste of time, honey,” Heather would confide in her daughter. “He wasn’t here for you when you needed him most. He ran off and wasn’t the father he should’ve been.”

Her photograph had been plastered all over the television and newspaper.

Heather Strong was distraught and eager to find her daughter.

“When was the last time you saw her?” the police officer asked Heather for what felt like the millionth time.

“Last Saturday, I think,” Heather informs the officer. “She came home early in the morning after her late night shift at work. I thought she was in bed. Her bedroom door was closed and I didn’t want to disturb her.”

“So you didn’t actually see her last Saturday?” the officer probes further.

“No, I thought she was asleep in bed.”

“Can you tell me where these came from?” the police officer asks, producing a pair of yellow rubber gloves.

“They’re mine,” Heather tells the officer. “I use them in the kitchen.”

The police officer pushes the gloves closer to Heather and she sees a few dark red spots dried on the rubber. “Take a closer look, Mrs Strong.”

“You know something, Mrs Strong,” the officer continues.

“What are you saying?” Heather’s world is beginning to collapse around her again.

“Where are your car keys?” the officer asks.

Heather Strong hands the officer her car keys and they walk towards her car in the garage. The police officer presses a button on the keys and the car boot lifts up.

Heather Strong steps closer to the car and looks inside the boot. A number of police officers surround her. At least five pairs of eyes gaze down into the car boot.

Before them, they see a sea of dark red. The interior of the car boot is covered with dried blood. A number of tools, including a hammer and wrench lay inside, also covered in blood.

Heather Strong gasps. The police officer standing closest to her grabs her arm.

“Heather Strong,” she hears one of the officers recite, “you are under arrest for your daughter’s murder.”

The residents of Peppercorn Patch welcome your return!

Season Six has begun. There Will Be Weeds!